Elected Protector of Waldenstein, hereditary Prince of Mirenburg, Defender of the Grail, Bloodguard of the Holy Roman Emperor, King of Crete & Damascus, Order of the Moravian Hierarchy, Antagonist-in-Waiting to Pope Clement the Dane, Curator of the Ariochan Temple, Knight of Saint Odhran and Saint Mungo,

Also known, of course, as Zenith the Albino or simply Count Zenith, is an aspect of the Eternal Champion and wielder of the Black Sword Stormbringer. He is most likely Elric during one of his dream quests. 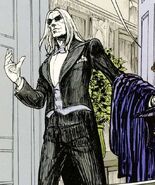 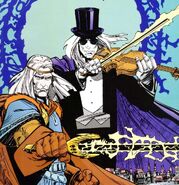