Unknown
Yyrkoon is a Dragon Prince of the empire of Melniboné, cousin to Elric and brother of Cymoril.

Yrkoon is convinced that his albine cousin is so feeble to stay over Ruby Throne and planned an usurpation. After a pirate attack against Imrryr (capital and main city in Melniboné), Yrkoon pushed Elric out of the ship. He thought Elric should die because weight of his armor.

In possession of Mournblade Yyrkoon had attempted to usurp the Ruby Throne from his cousin twice, seeing Elric as unfit to rule as Emperor due to his perceived disrespect for the traditions of Melniboné. Though Elric cared little for his throne, Yyrkoon also attempted to usurp his lover Cymoril both times by placing her into a sorcerous sleep.

These events will trigger a fight for power between Yrkoon and Elric.

Ultimately, his actions led to the death of himself and his sister, the sacking of Imrryr, and the fall of Melniboné by Elric's hand. 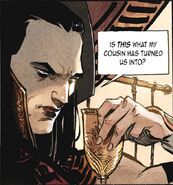