Count Urlik Skarsol, also called The Lord of the Southern Ice, is a manifestation of the Eternal Champion and bearer of the Cold Sword. Urlik is the second identity assumed by John Daker.

The Phoenix in Obsidian[]

After becoming Urlik, John slew the Queen of the Silver Warriors with the Cold Sword to resurrect the Chronarch's World's dead sun. Then John became Clen of Clen-Gar before becoming Urlik again. Then after a failed suicide attempt in the Great Salt Sea, Sepiriz convinced him to reboard the Dark Ship that sails between worlds. His only regret as Urlik was that he had not parted from his good comrade Bladrak Morningspear, the Hound of the Scarlet Fjord, with better character. He figured the people of Rowernarc, the South Ice, and the Scarlet Fjord would assume he had perished at sea. But in reality, he went on to assume the identity of Prince Flamadin in the Six Realms of the Wheel. 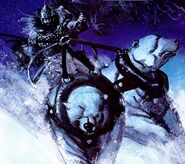 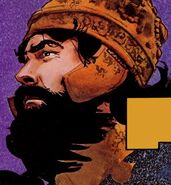 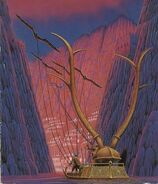 Corum dreams of having once been Urlik
Deutsch
Community content is available under CC-BY-SA unless otherwise noted.
Advertisement