Tanelorn, also known as Tan-al-Oorn, Shanalorm, the Eternal City and the City of Rest, is a city of Neutrality, supporting neither Law nor Chaos, which exists in some form in each and every world of the Multiverse.

Tanelorn essentially exists at the pseudo-centre of the Multiverse, and may be a physical manifestation of the Grey Fees. Due to its importance in the Multiverse, many manifestations of Tanelorn have been battlegrounds for cosmic forces. Kwll was sealed away in an aspect of Tanelorn of Corum's World, while an unknown, possibly archetypal version of Tanelorn was the site of Agak and Gagak's attempt to devour the Multiverse. The Blind Captain of the Dark Ship told Elric that it was "nothing but a broken dream of Tanelorn." 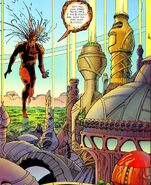 Tanelorn besieged by the forces of Chaos

Tanelorn threatened by The Singularity
Community content is available under CC-BY-SA unless otherwise noted.