Moorcock's Multiverse Wikia
Register
Don't have an account?
Sign In
Advertisement
in: Characters, Creatures, Characters Appearing in the Second Ether Series,
and 2 more

The Spammer Gain is a mysterious entity existing in the Second Ether. She is a sentient universe who was once a Scaling Ship. She is also a manifestation of the Holy Grail and therefore the Moonbeam Roads. She searches eternally for her Fishlings, spawn of the Spammer who were lured away from their mother by Kapricorn Shultz using a False Attractor. The Spammer Gain is of central importance to the mission of the Chaos Engineers. In the Michael Moorcock's Multiverse comics, the Spammer Gain finally finds her fishlings, who have grown into the Machinoix. 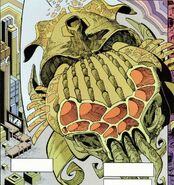 The Spammer Gain scaling through the planes of the Multiverse 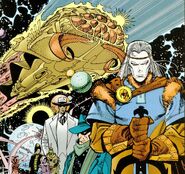 The Spammer Gain and the Champion(s)
Community content is available under CC-BY-SA unless otherwise noted.
Advertisement