Rackhir the Red Archer is a Warrior Priest of Phum and a former servant of the Chaos Lord Vezhan. He is an incarnation of the Eternal Champion, a resident and defender of Tanelorn, and friend to Elric of Melniboné.

Rackhir, as his nickname suggests, dresses from head to toe in red, and even carries red-fletched arrows. He is thin and gaunt but muscular, with a brown, weatherbeaten face, and has a friendly and jovial personality. His skill with his bone longbow is legendary.

Though Rackhir once served Chaos, he defected to the Balance, and after Elric helped him escape from the Shade Gate, he found Tanelorn in the Sighing Desert and settled there. He later helped Elric defend the holy city of rest from Theleb K'aarna's attacks against it.

During the time Zarozinia was kidnapped by Darnizhaan, Rackhir was responsible for saving Tanelorn from the Chaos Lord Narjhan and Rackhir's ex-lover, the sorceress/adventuress Sorana, with the help of Timeras, Brut of Lashmar, and Lamsar the Hermit. Rackhir then brought Sorana with him to Tanelorn so she could learn to love its peace with him.

After that, he aided Elric in his defense of the world from Pan Tang's armies of Chaos, but they were unable to hold the line. He went with Elric, his cousin Dyvim Slorm, and Moonglum to retrieve the Chaos Shield from Mordaga the Sad Giant. When Elric and Slorm went into a bloodlust fighting Mordaga's defenses with their Black Swords, Rackhir tried to snap them out of it, causing Elric to accidentally slay him with Stormbringer. Moonglum avenged him by murdering Mordaga, even though the giant gave them the shield peacefully. 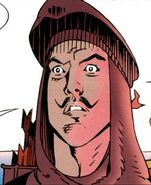 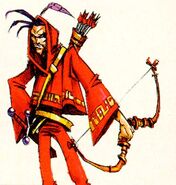 Rackhir as depicted in the canceled Playstation game
Deutsch
Community content is available under CC-BY-SA unless otherwise noted.
Advertisement