Prince Gaynor Paul St Odhran Badehoff-Krasny von Minct, known as Gaynor the Damned, Gunnar the Doomed, and Paul Minct, is a fallen knight of the Cosmic Balance and a cursed champion of Chaos. He is an arch enemy of Elric of Melniboné, Ulrich Von Bek, Oona Von Bek, Prince Corum and The Rose, and has crossed swords with Elric of Melniboné. In the guise of Paul Minct, Gaynor antagonizes Jack Karaquazian, Sam Oakenhurst, The Rose and Colinda Dovero.

Gaynor is responsible for the destruction of a universe dear to The Rose, and this has earned Gaynor her eternal hatred. Gaynor seeks the Holy Grail to be reconciled with the Balance, or else to die and drag all of the Multiverse into Limbo.

The Queen of Swords[]

In Corum's universe, Gaynor served Xiombarg and led an army of Chaos against the city of Halwyg-nan-Vake. Corum defeated him and removed his visor, exposing his face and banishing him from Corum's universe to continue his torment elsewhere. 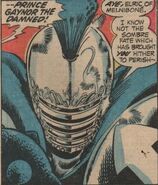 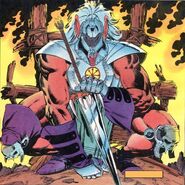