The Multiverse, also known as the Million Spheres, is all that exists. It is every possible world, in every possible timeline. It is an infinity of universes spinning through the Second Ether, and it is the setting of all of Michael Moorcock's stories. The two fundamental forces that create the reality of the Multiverse are Law and Chaos. Chaos introduces probability in the Multiverse, while Law structures it, creating reality in all its forms. These two opposing forces are held in check by the Cosmic Balance.

The Multiverse exists as an quasi-infinity of universes, separated by scale, embedded within the field of Time. Travel through the Multiverse is achieved by scaling up or scaling down, i.e. dissipating or condensing matter to transcend dimensional barriers. this can be done by accessing the Moonbeam Roads, or by using a Scaling Ship. Gods are limited in their travel through the Multiverse and must often be summoned in order to breach dimensional barriers. These barriers are more often than not held in place by the will of the Balance, and it is not a good idea to break them.

The eternal conflict between Law and Chaos rages at every scale of the Multiverse, and the Eternal Champion exists in myriad forms throughout the endless worlds in order to enforce the Cosmic Balance.

The swirling Chaos of the Second Ether 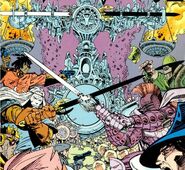 The Cosmic Balance and the eternal struggle for control

The Moonbeam Roads which lead between the worlds

Or Chaos vs Law?
Deutsch
Community content is available under CC-BY-SA unless otherwise noted.
Advertisement