Moorcock's Multiverse Wikia
Register
Don't have an account?
Sign In
Advertisement
in: Characters, Characters Appearing in the Elric Series, Chaos

Unknown
Jagreen Lern, the Theocrat of Pan Tang, is the final, ultimate enemy of Elric of Melniboné and a champion of Chaos.

Jagreen Lern and his people sought to imitate the emperors of Melniboné and commanded enormous chaotic magical powers. Throughout the saga he mocked Elric, tortured him and abducted his wife, eventually moulding her body into a hellish monstrosity as he did with the rest of their world by unleashing the full might of the Chaos Lords into their plane of existence.

Jagreen Lern's actions eventually led to the end of the World. In the final battle for control of the Cosmic Balance, he wielded a huge battle axe and wore an armour that was perpetually red hot and burning, given to him by his demonic masters. Elric and his army confronted Jagreen Lern's forces in the apocalyptic struggle that consumed the lives of nearly all combatants.

The battle outcome was only decided once Elric blew the Horn of Fate, inviting the Lords of Law into the fray. When he saw the odds changing against him, Jagreen Lern decided to flee. He was pursued by Elric and Moonglum riding a pair of dragons and could not escape them on horseback, however. When they finally caught up to the Theocrat of Pan Tang, Elric challenged him to single combat in order to get his revenge, to which Jagreen Lern responded with glee.

Using both Stormbringer and the Chaos Shield, Elric eventually won the fierce duel that ensued. And once the Theocrat was down on the ground with Elric's heel on his neck, Jagreen Lern begged for Stormbriger to take his soul for there were no place for it in all eternity. Elric declined his pleas saying he would not pollute his being with Lern's tainted soul - and not without some effort sheated Stormbringer.

Instead of simply killing him right away, Elric asked for one of Moonglum's blades and slowly tore his foe apart, piece by piece, demonstrating how the Melnibonéans toyed with such upstarts in the days when they ruled the world. Jagreen Lern took an hour to die, and only then because Elric's companion begged him to finish the Theocrat swiftly. 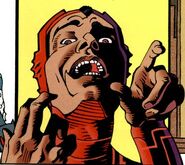 The terribe fate of Jagreen Lern at the hands of Elric 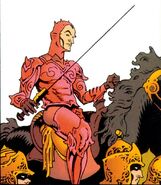