The Hand of Kwll is a supernatural artefact that was grafted onto the stump of Corum Jhaelen Irsei's missing left hand. It has the appearance of a six-fingered jeweled gauntlet of alien design. In reality, it is the actual severed hand of the Lost God Kwll, having been cut off eons before.

The Hand of Kwll sometimes seems to have a will of it's own, and this is due to Kwll still having conscious control of it, even though it has been separated from the rest of his body. When combined with the Eye of Rhynn, the Hand of Kwll is capable of summoning undead shades from a shadowy hell. The Hand of Kwll is incredibly strong, able to crush a human skull with ease and even able to shatter Arioch's Heart. It was eventually reclaimed by Kwll.

The Lost God Kwll and his six-fingered hand 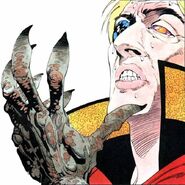