Elric of Melniboné, also called The Albino Emperor, Elric Womanslayer, Elric Kinslayer, the Pale Prince of Ruins, The White Wolf, and many other names beside, is the four hundred and twenty-eighth (and final) emperor of Melniboné and an incarnation of the Eternal Champion. Elric is symbiotically bound to his runesword Stormbringer.

"It is the colour of a bleached skull, his flesh; and the long hair which flows below his shoulders is milk-white. From the tapering, beautiful head stare two slanting eyes, crimson and moody..."

Elric is a Melnibonéan, and as such, he is not exactly human. He was born with albinism, making his flesh pale, his hair white, and his eyes a deep crimson. He is very tall, slender to the point of gauntness, yet elegantly muscled. Elric is normally attired in traditional Melnibonéan armour with a signature dragon helm. When not in armour, Elric favours all-black garb, but has been known to dress as a mercenary, donning wildly clashing barbarian attire. He carries Stormbringer in a scabbard at his belt, and wears the ancient Ring of Kings on his left hand.

Weak and sickly from birth, Elric is forced to subsist on drugs and potions to sustain his strength and health. This changes, for better or worse, when he obtains his sword, Stormbringer.

Elric was born the only heir to the Ruby Throne of Melniboné. His mother died in childbirth and his father, Emperor Sadric the Eighty-Sixth, blamed her death entirely on his sole, thin-blooded son. Elric's Childhood, while lacking the love of his father, was a time of sorcerous and academic education. By the time his father died, Elric had learned a great deal, and took the Ruby Throne as one of the most powerful sorcerers the world had ever seen.

Though Elric posessed all the arcane powers of his greatest ancestors and was the rightful heir to the Ruby Throne, the combination of his albinism and bad health, coupled with a strange (to the Melnibonéans) morality that he had learned in his studies, caused his people to consider him weak. Some, including Elric's cousin Yyrkoon, deemed him unfit for the Ruby Throne. Yyrkoon secretly plotted to usurp Elric if he possibly could.

Elric was betrothed to Yyrkoon's sister, his cousin Cymoril. Though she too often misunderstood Elric's strange morality, the two were very much in love.

During a battle in which the humans of the Young Kingdoms attempted to attack the Dreaming City Imrryr, capitol of Melniboné, Yyrkoon left Elric for dead when he fell off the deck of a Melnibonéan Battle Barge. The weight of Elric's armour caused him to sink into the sea, and Yyrkoon returned to Imrryr as its new emperor.

Fate and the Balance had other plans for Elric. Straasha, king of the sea, saved his life according to an ancient pact of loyalty made with Elric's ancestors. Elric returned to Melniboné as its true emperor once more, and Yyrkoon was arrested and sentenced to eat the flesh of his co-conspirators, pending his ultimate fate. Yyrkoon was a powerful sorcerer himself, nearly as powerful as Elric, and he used his magic to capture Cymoril and flee Melniboné.

Elric sent his soldiers to search the world for his traitorous cousin and his beloved Cymoril, but no trace of them could be found. Elric was desperate, he drew on the arcane knowledge of his ancestors and summoned his patron demon, the Chaos Lord Arioch, Lord of the Seven Darks. Arioch told Elric the information he wanted but at a terrible price - the barrier between Elric's world and the Higher Realms had been sundered by Elric's sorcery, and Chaos would now have a foothold in the material plane.

Elric personally led an expedition to find Yyrkoon, and confronted him in his stronghold. Cymoril was rescued, but Yyrkoon fled once more, this time through the Shade Gate, a portal that led to one of the infinite hells. Elric followed his cousin through the Gate, and found himself in a world as dark and closed as a giant cavern. Elric met a man named Rackhir the Red Archer, a wanderer of the Multiverse, and together they fought through the dark, cave-like hell to find Yyrkoon in the Pulsing Cavern, the legendary resting place for the runeswords Stormbringer and Mournblade.

Within the cavern, Yyrkoon took up Mournblade and Elric took up Stormbringer, and the terrible weapons sang in joy as the cousins fought and Arioch looked on. At the end of it, Yyrkoon had been defeated, and though the sentience within Stormbringer urged Elric to take his cousins soul, he refused, mastering Stormbringer with his own will.

Elric returned to Melniboné in triumph, with his beloved at his side, his treacherous cousin in captivity, and bearing Stormbringer, the legendary soul-devouring sword of his ancestors. Against all good judgment, and against the protests of Cymoril, Elric abdicated the Ruby Throne, appointed Yyrkoon as regent and set out for the Young Kingdoms, to learn of the world and seek the truth of his destiny.

Elric and the Young Kingdoms[]

Elric lived among the humans of the Young Kingdoms, traveling and earning his way as a mercenary. During this time, Elric would get a hint of his destiny and his true nature during his adventures aboard the Dark Ship. Meanwhile, Yyrkoon had Elric declared a traitor and an outlaw, ordering his execution should he set foot in Melniboné again.

The Pale Prince of Ruins

Bearer of the Black Sword

Elric exits a portal in the form of a Rose 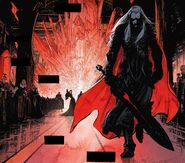 The Sailor on the Seas of Fate 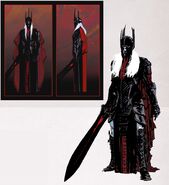 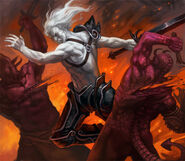 Last of the Dragon Lords 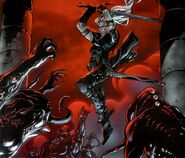 Elric plunging into battle against Chaos

Elric broods on the battlefield 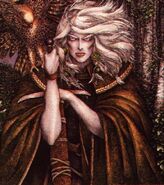 Elric is an extremely potent sorcerer

Elric sails the seas of the Young Kingdoms

Elric's barbarian mercenary attire and his Ring of Kings

A kingly portrait of the Albino Emperor 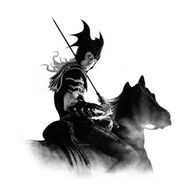 Elric cradles his Dragon Helm under one arm 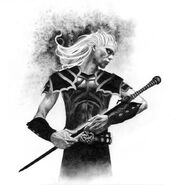 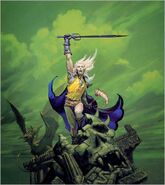 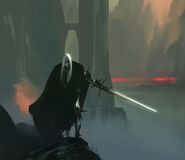 Elric wanders the world searching for his destiny

Elric dedicates his victims to Arioch

Elric vs the undead 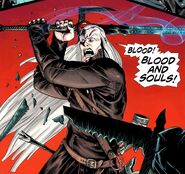 The White Wolf of Melniboné
Deutsch
Community content is available under CC-BY-SA unless otherwise noted.
Advertisement