Dragons, more accurately called the Phoorn, are creatures with serpentine bodies and wings which have an average span of thirty feet. They have forked tongues, cold eyes, teeth as long as swords and scaly reptilian hides extremely vibrant in colour, with multicoloured iridescent scales and butterfly-like markings on their wings. Phoorn dragons do not actually breathe fire - instead, they spit a highly flammable venomous saliva. They are also fully sapient and can be communicated with, if one knows their language.

In the novel called The Dreamthief’s Daughter we learn scraps of dragon-lore not hinted at in earlier books, there it is said that there are actually several types of dragons; but those native to Melniboné are long-nosed Phoorn dragons who, when young, have black and white rings around their tails and snouts as well as feathery tips to their wings. These markings eventually fade and the wing-quills are shed when a Phoorn Dragon reaches adulthood. Dragons are essentially immortal, but for every day of activity, such creatures have to sleep a hundred years.

The Phoorn do not breathe fire in the same way as a traditional dragon from human mythology. Instead, they excrete streams of venom that ignites any combustible materials it comes in contact with, including flesh, wood, leather, etc. Even the oxygen in the air itself ignites as the venom passes through it, and it will also burn on the surfaces of water and metal for a time before going out. Ulric von Bek also noted that they look nothing like the monochrome brown or green dragons of Human mythology and folklore, instead they can be of nearly every color.

Their venom has special properties: it is caustic, but can be caught and dried in a steel container. A small piece of dried venom, mixed with water, endows the imbiber with strength and courage for days. The peculiar metabolism that allows them to generate venom is the same that forces the dragons to sleep a century for every day of activity. Hence, dragons are long-lived, but spend most of it in sleep.

The Melnibonéans have a close relationship with the Phoorn, who live exclusively in caves below the capitol city of Imrryr. The people of Melniboné guard the beasts during their slumber, and use them as their air-force during their waking days, ensuring ten thousand year domination of the world and the Young Kingdoms. The Melnibonéans have even invented a saddle-like sorcerous membrane named skeffla’a which enables the dragons to move between planes of existence. For this reason, the Melnibonéans are called "Dragonlords" and their royal line is called the "Dragon Princes".

The Dragon Princes are introduced to the highly intelligent beasts as children in order to learn their language, which is always voiced as songs, for the Phoorn speak a language of their own, a musical language with no real words in which concepts are communicated by note and pitch. Dragon Princes such as Elric are fluent in the langauge of the Dragons and can communicate with them perfectly.

A dragon has a ridge on its neck which provide the rider with a natural seat, but when going into battle the Imrryrians ride in saddles and guide their dragons with song and the notes of a horn or, sometimes, with a lance-like goad. Flamefang, Sweetclaw, Scarsnout, Blacksnout, and Whitesnout are among the dragons living in Elric’s day.

Elric flies a Phoorn Dragon over the battlefields of 1940's Europe

Dragons flying over the city of Imrryr

Elric and Flamefang fly over the battlefields of Chaos 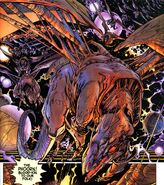 Phoorn Dragons flying through the Multiverse 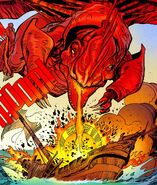 A Phoorn Dragon releasing it's flaming venom upon a ship
Deutsch
Community content is available under CC-BY-SA unless otherwise noted.
Advertisement