Duke Dorian Hawkmoon von Köln is an incarnation of the Eternal Champion. He was born in the World of the Dark Empire and bore the Black Jewel embedded in his skull.

He was the lord of Köln province. He was the hero of Köln, a champion against the agressors, a man of grace and sardonic wit, a warrior of skill.

The Jewel in the Skull[]

In a future post-nuclear holocaust Earth, higher technology has ceased functioning, and the world has regressed to a medieval state dominated by kingdoms of sword and sorcery. The former Great Britain has become the Dark Empire of Granbretan, ruled by the immortal Emperor King Huon of Londra and his Beast Men.
After a failed rebellion against the Dark Empire in Köln province, Duke Dorian Hawkmoon is captured. Baron Meliadus agrees to free him if he captures Yisselda, daughter of Lord Guardian of the Kamarg Count Brass, for him. The Empire embeds the Black Jewel in Dorian's forehead, which will relay his sight to Londra and eat his brain if he betrays them. Count Brass turns him by helping him contain the jewel's life force, but only the sorcerer Malagigi of Hamadan can make the reprieve permanent. Hawkmoon is instrumental in repelling Meliadus's attack on Kamarg, and Yisselda pledges her love to him.
Hawkmoon is joined by the half-giant archer Oladahn in his quest for Malagigi. A few months later, they are saved from a Granbretan attack by the Warrior in Jet and Gold. He accompanies them to Hamadan, whose Queen Frawbra was ousted by her brother who is in league with the Dark Empire. After helping Frawbra and her rebels retake the city, Malagigi is finally persuaded to draw out the Black Jewel's life force. The Warrior in Jet and Gold informs Hawkmoon that he is a servant of the Runestaff. Frawbra offers to make Hawkmoon her king, but he turns her down, and he and Oladahn return to Yisselda.

When renegade Frenchman Huillam D'Averc attempts to destroy the wraiths of the deserted city of Soryandum, they are saved by Hawkmoon and Oladahn, who capture D'Averc. In gratitude, the wraiths give Dorian a dimension-warping device that can save Castle Brass. Hawkmoon and Oladahn are joined by their former enemy D'Averc in rescuing Yisselda from the Muskovian Cult of the Mad God. Hawkmoon frees Yisselda from the hypnotic spell of the Mad God Stalnikov, slays him in combat, and takes his Red Amulet. The amulet drives most people mad with power, but after much convincing, Hawkmoon uses the amulet to control the Mad God's Beasts long enough for his party to escape the Beast Men on the jaguars' chariot. The Warrior in Jet and Gold becomes separated from them in his attempt to retrieve the wraiths' machine from the mounts they were forced to abandon. Fortunately, the Warrior succeeds in bringing the device to Castle Brass in time and activates it, saving the people of Kamarg and Castle Brass from the Dark Empire's conquest of the rest of Europe.

The Sword of the Dawn[]

Hawkmoon captures Elvereza Tozer, an intruder whose rings have the power to shift their wearers between dimensions. Hawkmoon and D'Averc use the rings to travel back to the Dark Empire and find their creator, Mygan of Llandar, before the Empire can use his technology to breach Castle Brass. They infiltrate the Court of Granbretan by posing as eastern ambassadors. King-Emperor Huon's only living relative, Countess Flana Mikosevaar, sees through their disguises, but she and D'Averc fall in love, so she gives the pair her Ornithopter to travel to Llandar. There, Baron Meliadus fatally wounds Mygan, but they escape him when Mygan transports himself, Hawkmoon, and D'Averc to Amarehk. In his dying moments, Mygan, who was a knowing servant of the Runestaff, gives them his rings and tells Dorian to seek the Sword of the Dawn in Narleen and then the Runestaff in Dnark.
Hawkmoon and D'Averc travel to Narleen, where Pahl Bewchard aids them in traveling to Starvel to retrieve the Sword of the Dawn from the Pirate Lords. The pirates capture and nearly sacrifice the three, but the Warrior in Jet and Gold frees them. Dorian retrieves the sword and uses it to summon the ghostly Legion of the Dawn from within the sword, who defeat the pirates. Then instead of heeding Mygan and The Warrior in Jet and Gold by questing for the Runestaff in Dnark, Hawkmoon tells D'Averc they're headed back to Europe to Castle Brass to see Yisselda.

Hawkmoon's attempt to return to his loved ones is thwarted when sea creatures crash their boat on an island. The Warrior in Jet and Gold's Orkneyman "brother" Orland Fank gives Hawkmoon and D'Averc a new boat with which to sail to Dnark to retrieve the Runestaff, whose spirit appears to them in the child-like form of Fank's "son", Jehamia Cohnahlias. Conspiring with Baron Kalan, Countess Flana, and his brother-in-law Taragorm, Baron Meliadus betrays and murders King-Emperor Huon and installs Flana as Empress of the Dark Empire of Granbretan. After retrieving the Runestaff, Hawkmoon and the company of the Runestaff go into battle with the Beast Men led by Baron Meliadus. By the time Dorian slays Meliadus, only he and Yisselda, who is pregnant with Hawkmoon's child, have survived the final battle. Grieving her lover D'Averc's death, Empress Flana ends the war and has Baron Kalan remove the Black Jewel from Dorian's head.

Hawkmoon and Yisselda have a daughter, Yarmilla, and a son, Manfred, who resembles the late Count Brass. But the Count's ghost starts appearing to Dorian in the marshes, leading him to the laboratory of Baron Kalan. Kalan and Taragorm have imprisoned Dorian's late allies, whom they plucked from points in time before they died, as part of a scheme they concocted to restore the Dark Empire of Granbretan. They flee, so Hawkmoon and Count Brass go to Rinal of the Wraith-folk of Soryandum, who gives them the means to follow them. Count Brass kills Taragorm and bisects his clock mask, but in doing so causes the Time Wind to send Dorian back in time to the final battle against Granbretan. As a consequence, he unintentionally alters history so that Count Brass survived instead of Yisselda. Dorian returns to a present where everyone believes his previous version of history was just a mad delusion, and he finds he cannot remember his children's names.

With the help of Jhary-a-Conel, Hawkmoon temporarily lent his soul to the Eternal Champion Ilian of Garathorm, whose own soul had been stolen by Baron Kalan, until she slays Kalan and returns their souls. In doing so, Yisselda, who aided Ilian in her defense of Garathorm, was reunited with Dorian.

The Quest for Tanelorn[]

Again aided by Jhary-a-Conel, Hawkmoon meets with the Warrior in Jet and Gold, Lord Sepiriz, Abaris the Magi, Lamsar the Hermit, Aleryon of the Temple of Law, Amergin the Archdruid, and the Lady of the Chalice, who tell him he would find his lost children in Tanelorn. Hawkmoon then finds himself alone on a shore, where Brut of Lashmar helps Dorian board the Dark Ship on their shared Quest for Tanelorn. He and his fellow passengers, Elric of Melniboné, Corum Jhaelen Irsei, and Erekosë, lead a team of warriors against the twin alien sorcerers Agak and Gagak at "a broken dream of Tanelorn" to stop them from absorbing the Multiverse.
After most of their team perishes in an assault within Gagak's fortress-like body, the four Champions slay her and merge her body with theirs to become the Four-Who-Are-One, a massive, many-limbed, four-faced Eternal Champion. In this invincible new form, they slay Agak, then unjoin and burn the twins' bodies. Corum, Elric, and Otto Blendker return to the Dark Ship while Hawkmoon, Erekose, and Brut of Lashmar remain to reach Tanelorn.
The Lost Gods depart the Multiverse following their aid of Corum in slaying the Lords of the Higher Worlds. Jehamia Cohnahlias and Sword, the spirits of the Runestaff and the Black Sword, respectively, are the only god-like entities who remain. They meet Hawkmoon and Erekosë in Tanelorn, where Jhary appears and gives Hawkmoon the Black Jewel. In return for the Black Jewel, Sword releases his hostages to them, Hawkmoon's family and friends and Erekosë's long-lost love Ermizhad, all of whom Sword retrieved from Limbo. The spirits then prompt the two champions into a final clash for the fate of the Balance on their behalves.
Sword enters the Black Jewel while Jehamia enters the Runestaff. The warriors destroy both objects in the battle, freeing them from the Cosmic Balance forever, but Erekosë perishes with them. He, Ermizhad, and Jhary become statues, joining those of countless other Eternal Champions, Companions, and Consorts in Tanelorn. Orland Fank gives Jhary's winged cat Whiskers to Hawkmoon's daughter Yarmilla. Grateful for his "son" Jehamia finally achieving peace, Fank elects to stay in Tanelorn, as do Emshon of Ariso, John ap-Rhyss, and Brut of Lashmar. Huillam D'Averc returns to Countess Flana, while Oladahn, Bowgentle, Hawkmoon, Yisselda, Yarmilla, and Manfred return to Castle Brass, where the children would meet their grandfather, Count Brass.

In an alternate timeline, a version of Hawkmoon didn't use the Red Amulet, and misfortune befell him and his party as a consequence. He eventually engaged in a battle with an Erekosë in Tanelorn for the fate of the Balance similar to the one in The Quest for Tanelorn. Elric's family on a modern-day Earth distracted him so that the two warriors killed each other instead of the spirits of the Balance, ensuring a version of the Cosmic Balance would endure. To ensure the defeat of his reality's Dark Empire, Oswald Bastable bombs Londra.

In Elric: The Balance Lost, Whiskers informed Yarmilla of the resurgence of the Order of the Fly. She related this to Hawkmoon, prompting him and Huilliam D'Averc to travel to Narleen to stop them, which they only achieved by aiding their fellow Eternal Champions and Companions in restoring the Cosmic Balance. After they did so, Whiskers watched Elric return Hawkmoon to his family before departing on the Moonbeam Roads. 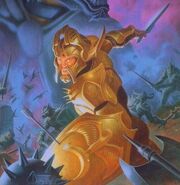 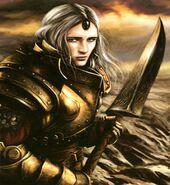 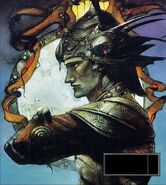 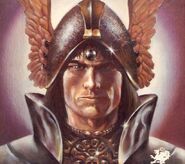 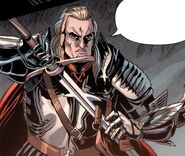 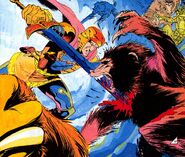