Cymoril is a Melnibonéan princess, the sister of Yyrkoon, and the cousin of Elric as well as his beloved. She loves Elric and remains loyal to him despite not understanding his non-Melnibonéan sense of morality.[1]

Like most Melnibonéans, she is skilled in the art of sorcery. For example, she summoned Elementals to make sure there was beautiful weather for one of her trysts with Elric, despite the fact that Yyrkoon had tried to forbid her to use magic.[3]

Cymoril was Elric's confidant and childhood sweetheart. She would often ride with him and worry for his safety during his first dreamquests and his early years as Emperor.

Cymoril was kidnapped by Yyrkoon in his desire for power and revenge against Elric and taken to the city of Dhoz-Kam in the Young Kingdoms where she was later rescued by Elric. After that, he left Yyrkoon in charge as Regent while he spent the following year exploring the Young Kingdoms, which greatly angered Cymoril.[1]

During Elric's self-imposed exile from Melniboné, Yyrkoon placed Cymoril back into a sorcerous sleep. Elric traveled to the City of Beggars and the Hyborian Age in search of a means to wake her. After failing that, he led a daring raid against his own people in an attempt to rescue her.

She was accidentally slain by Elric using Stormbringer in the final duel between the albino and his cousin Yyrkoon.[4] 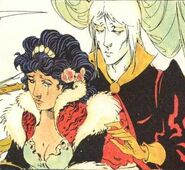 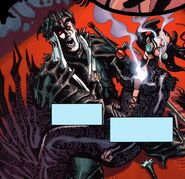