Moorcock's Multiverse Wikia
Register
Don't have an account?
Sign In
Advertisement
in: Characters, Characters Appearing in the Hawkmoon Series

Count Brass is the protector of Kamarg and the ruler of Castle Brass. He is an ally of Dorian Hawkmoon and an enemy to the Dark Empire of Granbretan.

On his rides, Count Brass always comes to the Ruin. He feels a kind of fellowship with it for, like him, it is old, like him, it has survived much turmoil and, like him, it seems to have been strengthened than weakened by the ravages of time.

In the Kamarg, it is not unusual to hear the legend that Count Brass is, in fact, not a true man at all... but a living statue in brass, a titan. Invincible, indestructible, immortal. Though no attack has been made on the Kamarg since Count Brass replaced the former, corrupt Lord Guardian.

Count Brass has led armies in almost every famous battle of his day. He had been the power behind the thrones of half the rulers of Europe. He had been, in truth, a mercenary. But he had been a mercenary with an ideal, and the ideal had been to set Europe toward unification and peace. At length, tiring of wars, of intrigue, and even of ideals the old hero accepted the offer of the people of the Kamarg to become their Lord Guardian.

He is well known of his skill in politics, his wisdom, his knowledge of all the weaknesses and strengths of the european courts. Those who know Count Brass know that he is a man in every sense. A loyal friend, a terrible foe, given much to laughter yet capable of ferocious anger, a drinker of enormous capacity, a trencherman of not indiscriminate taste, a sage in the ways of history, a wit and a swordman without peer.

Count Brass, with his rolling, warm voice and rich vitality cannot help but be a legend. For if the man is exceptional the so are his deeds.

His true and greatest friend is Bowgentle. 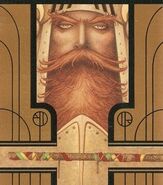 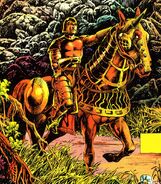 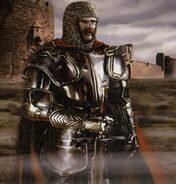