The lords of Entropy and Freedom, and servants of Chaos.

Chaos manifests itself in an infinite number of forms and guises. Chief among these are the Chaos Lords, also known as the Lords of Entropy and the Dukes of Hell. The Chaos Lords are essentially living embodiments of Chaos. They are worshipped as gods in many worlds, and reviled as devils in others.

The Chaos Lords represent Chaos in all of its aspects, and they actively oppose Law and the White Lords who serve it. They are prone to shapeshifting, taking on horrific forms as eldritch abominations or hulking demons, or luminous forms of youths possessing unearthly beauty. Their tempers are as fickle as their physical forms, and they are very prone to violent mood swings. Many of them behave as if they are insane.

Like Law, Chaos is beyond good or evil, and as such there are examples of Chaos Lords who fight for good, and rally against the forces of Singularity represented by Law's negative aspect. These beings are referred to as Chaos Engineers, and include the famed Corsair of the Second Ether, Captain Billy-Bob Begg.

Balo, the Jester to the Court of Chaos, is able to move at will between the realms of Chaos and Law because he is not exactly a Chaos Lord. His function at court is to amuse and baffle the Lords of the Higher Worlds. At one point, he tries to convert Earth into his own Realm of Paradox.

A Chaos Lord summoned by Yyrkoon

Beelzebub, lord of the flies 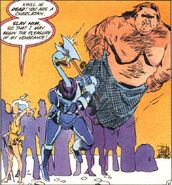