Moorcock's Multiverse Wikia
Register
Don't have an account?
Sign In
Advertisement
in: Weapons, Chaos, Objects of Power,
and 2 more
English

The Black Sword is a cosmic archetype, able to exist in any universe in almost any form. It is the weapon of the Eternal Champion, but it is not always borne by him or her. As the name suggests, it most often takes the form of a massive black runesword. The Black Sword is alive, fully sentient and malevolent. It has a will of its own and will often disobey the wishes of its wielder.

The Black Sword devours the souls of its victims, and can even kill gods. It exists in the Higher Realms as creatures of Chaos, and can partially manifest as black-bladed swords or other weapons (such as Jerry Cornelius' Needle Gun or the Banning Gun) on the material plane.

The Black Sword has been called by many names in its different manifestations across the Multiverse, including Stormbringer, Mournblade/Ravenbrand, Kanajana, the Cold Sword, the Dragon Sword, and Murakamo-No-Tsurugi (Japanese for Sword of the Gathering Clouds).

Though the Black Sword is a being of Chaos, it seems to be an instrument of the Balance, akin to the Runestaff and the Horn of Fate. This is likely because in some cryptic way, the Black Sword and the Eternal Champion are one.

Lucifer has also claimed to be one with the Black Sword.

"Well. I can tell you now that Stormbringer's 'real' being is related to other supernatural forces on another plane. I know how to summon them, but these relations are also creatures of Chaos and therefore, as far as you're concerned, somewhat hard to control. They could well get out of hand in some way— perhaps even turn against you. Stormbringer, as you have discovered in the past, is bound to you by ties even stronger than those which bind it to its brothers, but its brothers outnumber it and Stormbringer might not be able to protect you against them."

The Champion and the Sword 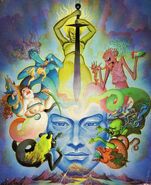 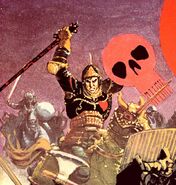 The possible true form of the Black Sword

Elric with Stormbringer and Mournblade