Earl Aubec of Malador was a human warrior and hero of the Young Kingdoms who lived centuries before the time of Elric. He was the Earl of Malador in the Lormyrian province of Klant, the champion and lover of Queen Eloarde, and an incarnation of the Eternal Champion.[1]

As a reward for his courage, and as an alternative to claiming her Castle Kaneloon for Eloarde, the sorceress Myshella showed Aubec how to extend the physical boundaries of Earth by forming new lands from the unformed Chaos at the World's Edge, thus furthering the cause of Law and enlarging his queen's domain. This was a significant event in bringing about the Age of the Young Kingdoms.[1]

After his death his sword was wielded by Elric before obtaining Stormbringer.[2] 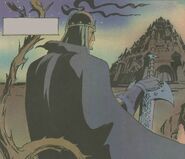 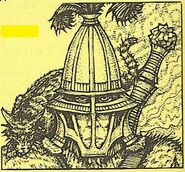