Arioch is one of the most powerful of the Dukes of Hell. He has many titles and nicknames including Knight of the Swords, Lord of the Higher Hell, and Lord of the Seven Darks.

Arioch is the patron of Melniboné and has a personal relationship with Elric, who was the first emperor to summon him to the plane of Earth in a long time. He is sophisticated and highly intelligent, though possibly insane, and he usually (but certainly not always) appears as a beautiful youth, usually with blond hair.

When summoned, he has also been known to take the form of a large black fly [1] or a black alien shape, horrible to look upon.[2]

Arioch is one of the three Sword Rulers along with Xiombarg and Mabelode, and the first to be slain by Corum Jhaelen Irsei. He created the Mabden and had them wipe out his race, the Vadhagh, not out of malice but as a careless purge of the creations of the Lords of Law after winning the Fifteen Planes from them. Corum took his revenge against him by crushing Arioch's heart with the Hand of Kwll.

Lord Jagged, a Denizen of the End of Time, once took the form of Arioch to manipulate Elric. It is implied that Jagged and Arioch may be one and the same. 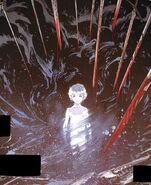 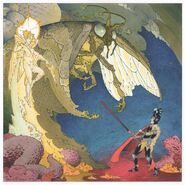